If you read our blog you know that when our visit with Bob and Linda came to an end, one of our leveling jacks wouldn't come up. I of course blamed on bad Bob. Linda commented that bad things happen in 3's, but i ignored her because I'm not the superstitious type.

We traveled on to Rockport where on Friday we received a call from our bank. It seems that someone stole our credit card info so they were canceling our cards. Strike 2. Of course new cards couldn't be shipped out till Monday, so we changed plans and stayed put until the new cards arrived yesterday. No big deal, and the cards arrived when they said they would.

This morning we paid our bill and when I went to hook up the Explorer I noticed we had a problem. Somehow the electrical cable which goes to our toad was missing. I apparently didn't tuck it away under the hood and it fell on the ground and we ran over it, or something like that. A quick stop at Walmart for some wire and a plug and a few crimped connections in the pouring rain and we were ready to hookup. Strike 3.
Now where is that pin? Yes we were missing one of the connecting pins for our tow bar. I have never lost one in all our years of Rving, but this was the morning. Fortunately I do have a spare and after digging it out we were hooked up and on our way. Strike 4.

We are now safely parked for a few days in Huston at the Elks Lodge. Full hookups, concrete pad, and level. Maybe we should stay here until it's time to head back to Michigan. See Linda, bad things don't happen in 3's, they happen in 4's. Oh well life happens and you deal with it.

P.S And I didn't even mention how we had to unhook and turn the RV around on a 2 lane street without going in the ditch. After everything else today that seemed like no big deal.
Posted by John and Judy at 4:21 PM No comments:

We are currently hanging out in a small rv park in Rockport TX. Yesterday I poked fun at "Bad Bob" so I wanted to follow up and talk about how much we enjoyed our stay there. The 10 days we were there went by much too quickly. I decided to sum it up by giving a David Letterman type top 10 list. So here goes.....counting down from number 10

10. Happy hour. Every evening around 5 we gathered for wine and a few snacks
9. The warm weather. 80 in January is great.
8. Shorts. When it's 80 you get to wear shorts and T shirts.
7. Getting to help with Bob and Linda's coach house. Brushed up on my electrical and plumbing skills.
6. Made some new friends. We got to know Roger and Diane better, and met Jim and Val from Canada
5. Bike riding. We finally made use of those bikes we've been carting around.
4. Open house. On Friday we attended their annual open house and got to see how everyone finished off their coach house.
3. Went to a wine tasting featuring Spanish wines.
2. Went on a boat cruise on the Rio Grande

And drum roll please.........
Number one on our list was just spending time with our good friends Bob and Linda.
Thank you for such a good time.

Until later
Posted by John and Judy at 5:03 PM 1 comment: 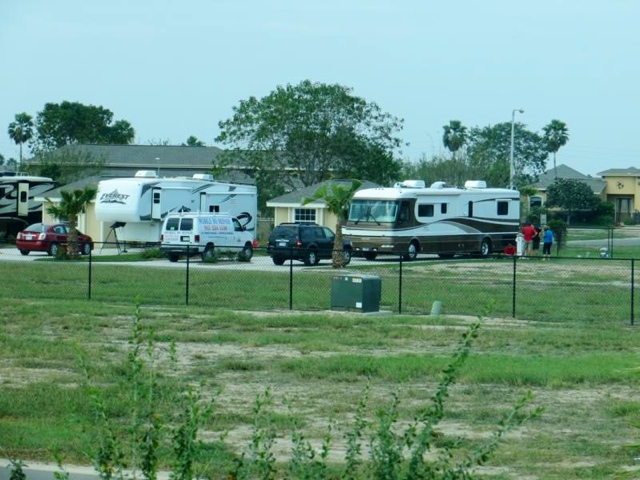 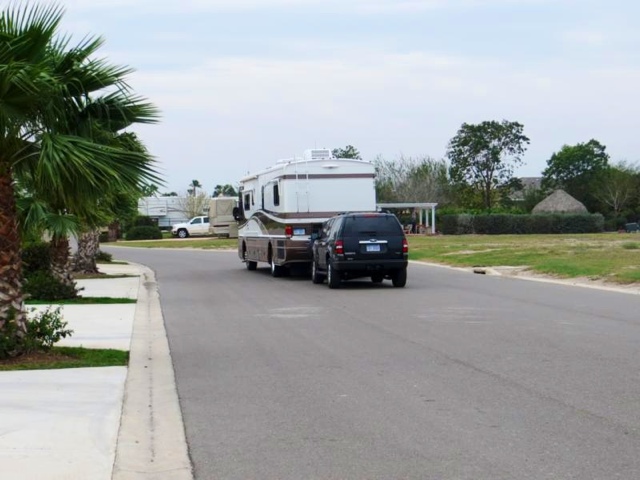 I've hired someone else to write my blog

Since Bob did such a good job telling what we did yesterday, I'll just direct you to his.

until later
Posted by John and Judy at 3:33 PM No comments:

Actually we are in Mission Tx. We are at Retama Village for 10 days. We are here visiting our friends Bob and Linda. Yesterday was Judy's birthday. Bob and Linda made sure she had a good time. Me....well Bob just put me to work. That's ok since I have a toilet project and according to Linda, Bob knows more about what goes into a toilet than anyone else so I figure can fix ours....

Since I'm on vacation if you want to see pics from yesterday go here.

Until later
Posted by John and Judy at 1:08 PM No comments:

We spent 3 days in San Antonio. We stayed at the Elks on the north side next to an even older American Eagle. Electric hookup only but since we came in with a full water tank and empty holding tanks, it was no problem. It was a good time to get stocked up and and few housekeeping things taken care of. We managed to fit in a nice walk and lunch downtown on the riverwalk and Mollie got a haircut. We also found the local Trader Joes and Whole Foods so we are stocked up to head further south. Maybe we can find some warmer weather. So far it's not much different than back in Michigan. 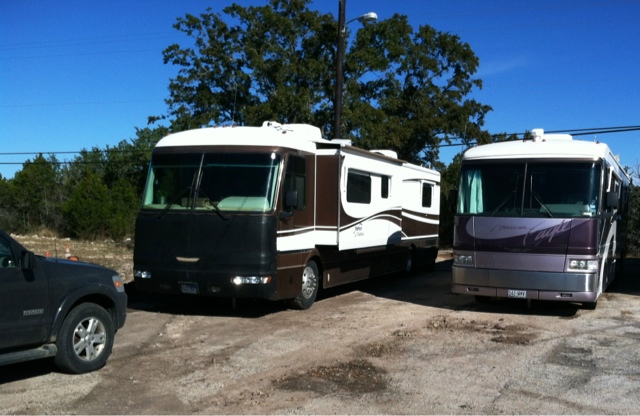 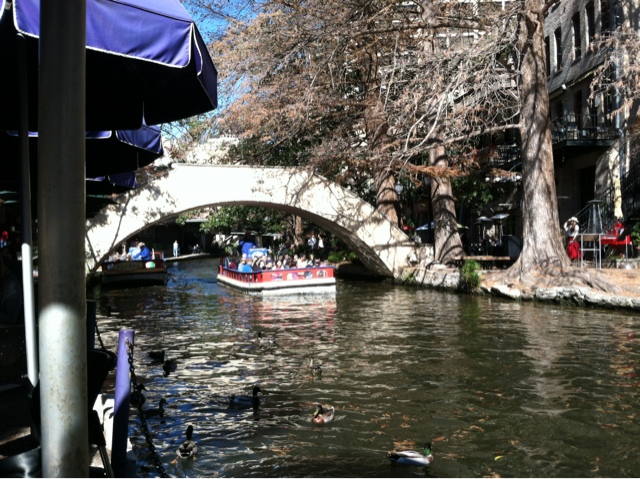 It has been raining a lot the last couple days but it didn't stop us from making a few day trips. Monday we went to Austin to the flagship Whole Foods store. I went to have coffee with a photographer who's blog I have followed for several years and Judy to shop. Both of us had a great time.

Tuesday we had lunch with a friend that we hadn't seen in over 30 years in Marble Falls. Facebook can be a wonderful tool to contact friends from the past.

We have had over 3 inches of rain in just a couple days. I have been concerned about a leak that we have not been able to fix in our roof. I have spent several hundred dollars having various "experts" trying to fix it. Before we left Michigan my buddy Stan took a try. After driving through snow, sleet and heavy rain I am happy to report we finally have a dry coach. Good work Stan, and I owe you big time.

Yesterday we made a pilgrimage to one of our favorite restaurants, Salt Lick BBQ. We came home with enough leftovers for another meal.

Today our week was up at the park we were staying at, and even though we are not quite ready to leave this area we decided to move. Between an unlevel site and very poor cell phone reception we decided to move. Not far, only 15 miles. Thanks Thom for the recommendation.

A beautiful day in the Hills

Yesterday morning we drove to Johnson City to have breakfast with some fellow RVers Thom and Dar. We last saw them in Portland so it was nice to catch up on things. It took us almost three hours to solve most of our country's problems. We did save a few problems to work on till our next visit.

We then drove to Fredericksburg to go to the Nimitz museum. Our friends Bob and Linda volunteered here a few years ago. Well worth seeing, but I wish Bob had been our tour guide.
We were going to go to Cranky Franks for lunch but got there too late for lunch, so we headed back to the RV. Just another nice day in the hill country.

Until later
Posted by John and Judy at 4:32 PM No comments:

Hiding out in the Hills

Well, we changed our plans a bit. Instead of stopping in Waco we continued south to the Texas hill country between Austin and Fredericksburg. We are going to hang out here for a week or so. Time to wash up, stock up on a few provisions, and maybe sneak in a little texas bbq.

Until later
Posted by John and Judy at 12:46 PM No comments:

When we left snowy Michigan we did not take our normal route south. Instead we headed towards St Louis and then SW from there. Our reason for doing this was to stop in Bentonville AR to visit a new world class art museum.

Founded by one of the heirs to the Walton (Walmart) fortunes, Crystal Bridges is indeed worth a detour. I won't bore you with the details, but a quick Google search will get you all the info you need. If you are interested in American art it's worth a visit. And best of all it's free. 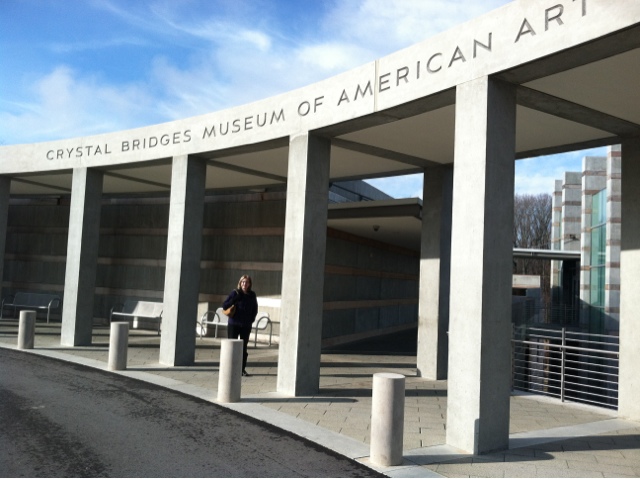 We spent the night on the border of OK and Texas. Nice little Rv park, passport rates and as an added bonus a busy rail line 50 yards behind our Rv. On to Waco today.