Two years ago we put our condo on the market.  Nine months later with only one showing we took it off the market.  If you have been following the real estate scene you know how bad it is.  And as bad as it is nation wide, Michigan has to be at the bottom.

When we left Michigan last October Stan and Kathleen, our business partners, were getting ready to build a new house, and having sold their house, needed a place to stay.  We offered our condo since we were going to be gone, and the heat has to be on anyway.  It was reassuring having someone looking after the place and keeping an eye on things.  When we came back in April, to be here when Harrison was born, we decided to put the condo back on the market.  After meeting with a realtor and gritting our teeth over how much we have already lost, we listed it.

While we were at Haas Lake we got a call saying we were going to have two showings.   Stan and Kathleen have kept the place in ready to show.  Kathleen had even gone out and bought hanging baskets and replanted the window boxes.  Last Tuesday we had not two but three showings.  John was scheduled to go the Indianapolis for business, and of course while he was gone we received an offer.  Several phone calls, pdf's and faxes insued and by Friday we had a full cash offer, no contingencies, no inspections.  We are both in a bit of a daze.  We now need to sell furniture, and decide if we are going to remain Michigan residents.  Closing is to be no later than the first week of July.  But you know what they say.  The job's not finished till the paperwork is done.  But so far everything looks good. 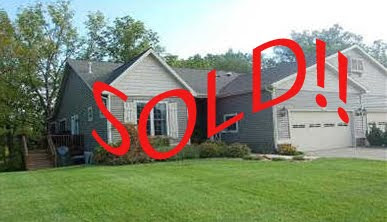 On Saturday we drove down to Kokomo, Indiana to attend our nieces graduation open house. I remember when her mom, Shannon was in our wedding.  She was three at the time.  Yes I am feeling old.

We followed John's brother Mark home on the back roads and stopped in Shipshewana to have dinner at the Blue Gate restaurant with Mark and family, and John's sister Diane and her husband Bud.  It was a busy but memorable week.