Roast Chicken with a side of hail

Today we had an uneventful drive from Hobbs,New Mexico to Hudson Oaks,Texas which is about 30 miles west of Fort Worth. It was a boring drive but we made up for it tonight.

We were parked at the Super WalMart where we planned to spend the night in their parking lot. We decided that a roast chicken sounded good for supper, so we went inside to ask permission to spend the night and to buy chicken and a few other things.

When we came out of the store we noticed the sky looked very dark to the West so we turned the TV on to watch the weather reports while fixing supper. We had just started eating when a tornado warning was issued for the area just to the west of us and it was headed directly our way. So we decided we needed to move the motorhome.

We quickly put things away and began driving back to the Southwest on I-20 to see if we could avoid the worst of the storm. We had gone about 2 miles when John remembered we forgot to lower the tv antennae. Judy got out of her seat and tried to get it cranked down but with the strong winds and rain it wouldn't budge. So we quickly pulled over to the side of the expressway and John got it down. As we pulled back onto the road it began hailing so we pulled over once again and sat under an overpass for a few minutes. Crazy!!!!!! 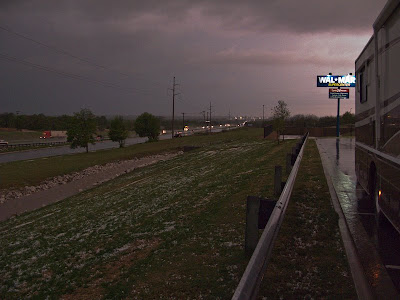 We stopped to fuel up at a truck stop and let the storm pass then headed back towards the WalMart. We were shocked to see what at first appeared to be inches of snow along the highway. We soon realized it was hail. The area around the WalMart parking lot was peppered with hail and there were a few overturned shopping carts. 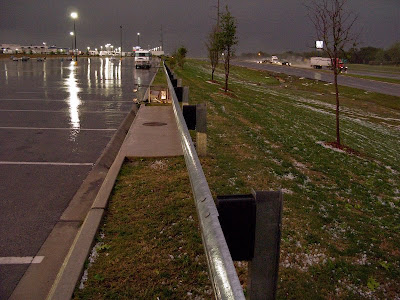 The pictures don't really do it justice. We just saw a news clip showing footage of blown out windshields at a car dealership near here. Reports are that this area had hail from dime size to golf ball size. We feel very fortunate and blessed that we are safe and had no damage to our home on wheels. 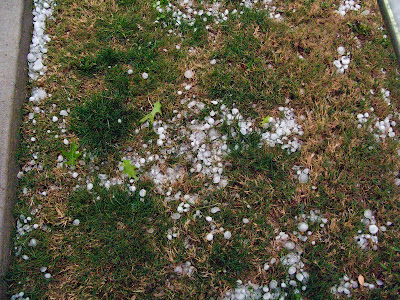 Tomorrow we move on towards Alabama, hopefully with better weather.
Posted by John and Judy at 10:01 PM No comments: