A State of Mind

Where in the world are Judy and John?????

As we left our intrepid voyagers they were in Santa Fe contemplating where to go to next. It was on to Cimarron, New Mexico where else? We have always wanted to visit Taos and the “enchanted circle”. After discussing the route with locals it was decided that we should go east and then north to avoid some difficult roads. That wasn't true but more about that later.

So on Monday morning we headed out of Santa Fe. We arrived in the sleepy little town of Cimarron 4 hours later. We checked into the Cimarron Inn and RV park. We were the only ones staying in the campground and as it turned out we had no cell phone service or internet connection. We fixed ourselves a quick lunch and then hopped in the jeep to check out the small town. Also known as the home of Philmont Scout Ranch. Cimarron is an old western town with lots of history, and it was authentic. By that we mean no gimmicks, just nice people struggling to make a living. We think we were among the very few 'non-locals' who visited the little shops that day. We had fun and just relaxed. 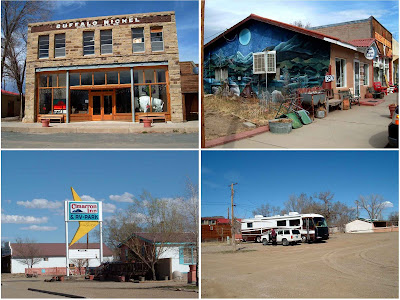 Tuesday morning we headed up Cimarron Canyon to hook up with the 'enchanted circle'. This is a road that goes through several small towns and offers spectacular views as it circles around the highest mountain in New Mexico. Mt. Wheeler is actually on the southern end of the Rocky Mountain range and is over 14 thousand feet high. Our circle started as we headed north out of Eagle Nest. We went over Bobcat pass and dropped down into the town of Red River. We visited a store that was selling animal wood carvings to look for a bear. We didn't see anything we wanted to buy but enjoyed the stop.

In the town of Questa the circle turned south and we soon found the terrain to be between high desert and mountain. We went through several small towns and it was easy to see the difference in the economy. If the town had skiing available, like Red River, the economy was doing well. If it didn't have anything to draw tourists, it was barely surviving.

We then took a brief detour to the west to view the Rio Grande gorge. It's hard to explain, but we were driving across the desert and suddenly a giant slit in the ground appeared. It's a 800 foot deep gorge with a bridge across it. We have never seen anything like it. This shows the gorge from the middle of the bridge. When you are standing out on the bridge it shakes up and down every time a truck goes across. Not exactly reassuring.

It was time for lunch so we headed south to Taos. It was warm outside so we found a little cafe and sat outside to eat. When we were done with lunch we visited a few galleries and then found a coffee shop with some great local coffee. Before leaving Taos we visited the St. Francis of Assisi Church. After being at the Basilica of St. Francis of Assisi in Assisi, Italy it was only fitting to visit St. Francis of Assisi church in Rancho de Taos. Built between 1772 and 1816 it is uniquely southwestern. This church has been painted and photographed by artists such as Georgia O'Keefe and Ansel Adams. So it seemed only fitting that we should photograph it!!! 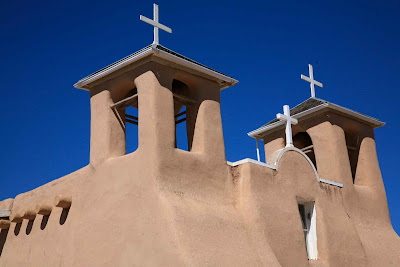 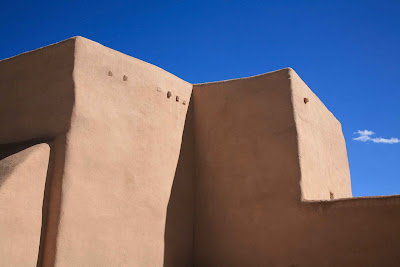 We then headed east back over the Palo Flechado pass, past the ski resort town of Angle Fire and completed the circle in Eagle Nest. We headed back down the Cimmaron canyon and called it a day. It turns out we could have taken our rolling home from Santa Fe directly up to Taos. The roads aren't any worse than some others we have traveled on. So we will consider this our scouting trip. We'll be back. D. H. Lawrence is quoted as saying “Taos is not a place, it's a state of mind”. Who are we to disagree.
Posted by John and Judy at 10:08 PM No comments: