2 Santa's and a bridge 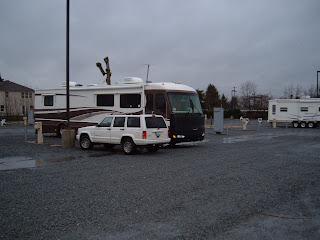 Morro Bay to Santa Cruz to SantaRosa
February 5-6
Monday morning we pulled out of our campsite at Morro Bay and, needing to fill up with diesel fuel in Paso Robles, so we headed east on highway 46. What we didn't realize before we started was that highway 46 over to 101 is about 15 miles of switchbacks as it winds and twists it's way through the mountains.
While this type of road may be fun in the jeep, it's a little more unsettling in an rv! But John did a great job getting us safely to Paso Robles and on to Santa Cruz.
After an over night stay in Santa Cruz we made our way up to Santa Rosa where we planned to stay for 2-3 nights. But first we would have to endure a BRIDGE CROSSING and I have to confess, driving over long bridges in the rv isn't something I enjoy at all. And John's not that crazy about it either.
We decided to drive around on the Oakland side to avoid going through downtown SF and the golden gate bridge. However, that meant we would have to cross the San Francisco Bay on the San Rafael bridge, a double decker, and even longer bridge than the golden gate. We had the privilege of paying the state of California eight dollars and 40 cents for this dubious pleasure.
Once again John did a great job maneuvering us through traffic and getting us safely over and across the bay . (while I silently kept repeating to myself that we were almost across...almost across!! ) :)
We found a great campground in Santa Rosa behind the Sonoma County fairgrounds. We have full hookups and free wi-fi connection for just $10 a night with our Passport America membership. And one of the best things about this park is we practically have the place to ourselves. It's very quiet and there are only a handful of other rv'ers staying here.
We got here in time to fix lunch and squeeze in a trip to the Korbel winery in the near by Russian River valley and returned to the rv via the Nuclear free zone of Sebastopol. Yep this town really has declared itself to be such a zone. It was reassuring to know we were safe from Missiles and nuclear waste.
Supper, a little writing, and it was time for bed.
Judy n John
Posted by John and Judy at 11:35 PM 1 comment: 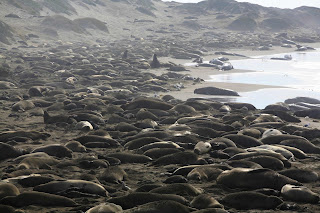 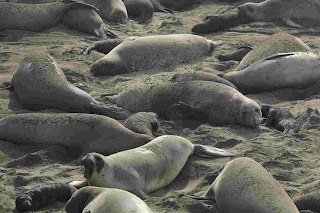 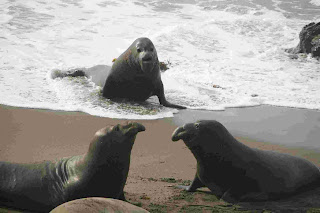 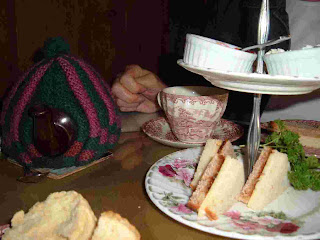 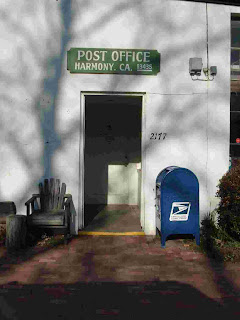 With the weather to be sunny and in the upper 60's we decided to drive the jeep up Highway 1 along the coast just to see what photo opportunities we might come upon. Highway 1 is a winding, twisting, beautiful stretch of highway that runs right along the coast from southern California all the way up to San Francisco.

Just after passing the little town of San Simeon we saw a turnout off to the side of the road that seemed to be attracting a lot of people. So we decided we would see what the attraction was for ourselves. We pulled in , parked the car and discovered an awesome sight. The beach area was literally covered with elephant seals basking in the sun. Apparently, the females come ashore around the first part of February and give birth on the beach. The pups were small so we figured they had only been born about a week before. The males(bulls) were there as well but stayed closer to the waters edge protecting their little harem of females and keeping other bulls from getting too close. We throughly enjoyed what we were seeing and could have watched and listened to their interaction for hours. But, we needed to move on.
North of San Simeon, Highway 1 is literally built into the side of the Santa Lucia mountain range. At times only a guardrail is separating the road from a drop of a few hundred feet into the ocean.
We love this highway and it's awesome views but it was now 12:30 , and we were getting hungry. We had decided earlier that we would skip lunch and have afternoon tea at the Tea Cozy in Cambria. So we decided that we should turn around and head back and about an hour later we arrived back in this cute coastal town about 20 miles north of Morro Bay.
The Tea Cozy ( http://www.teacozy.com/ ) is a small (very small...about 8 tables) english tea house and restaurant housed in an old house that was built in the 1890's. All the tables were full when we arrived We were told it would be about a 15-20 minute wait so we did some window shopping at some other shops down the street while we waited for a table to open up.
In the past, we have thoroughly enjoyed the British tradition of afternoon tea, both in London and at the Grand Floridian resort at Disney World so we get excited whenever we have a chance to have it.

John and I each ordered the Dutchess tea selection of a cheddar and chutney tea sandwich and a scone with clotted cream and jam to go along with our pot of tea. Now, this wasn't a lot of food and while we both would admit that most of the fun is in the experience, we were still hungry when we left the restaurant! We went back home and declared it to be peanut time! Oh and by the way Harmony really is a town, population 18. We've had a really good time in Morro Bay and Paso Robles area but it's time to move on.
Tomorrow it's on to Santa Cruz.
Posted by John and Judy at 2:47 AM 1 comment: