Before we left last Fall, we had some wiring updated on the RV as well as a new HD satellite dish installed, and we replaced and relocated both TV's.  We have 3 ways to get television reception.  The satellite, an antenna for local channels, and we also have a cable input that we can use if we are staying in a park that has cable hookup.  We discovered early on in our travels that our cable hook up no longer worked.  Something got unhooked during all the re-wiring.  Since we seldom use the cable input we didn't worry about it and we planned to stop in Ohio on our way back to Michigan to have it fixed.

However when you are staying at an Escapees park, it is nice to hook up the cable because they post all their weekly activities on one of the cable channels.  If you can't hook up it's harder to keep up with what's going on.  So Monday I decided to see if I could figure why our cable wouldn't work.  I went to Home Depot and bought a few parts and then went to work.  It only took about 15 minutes of testing and tracing the wiring to find the problem.  Best of all it was fixed with only a two dollar part.  So now we have access to channel 3 for the park schedule.  Judy quickly noticed that a 'moderate' hike was scheduled for Tuesday morning so we walked down to the activity building and signed up.

Tuesday morning at 8am we met 14 other people at the activity center and formed a 5 car caravan down to Anza Borrego Desert State Park.  Yes, we were dry camping in this area last week but the Park is so large that unless you know where to go it is a bit overwhelming.  We ended up turning onto a two track going towards Buttes Pass.  After a couple of miles on this dusty, bumpy trail we stopped at an overlook. 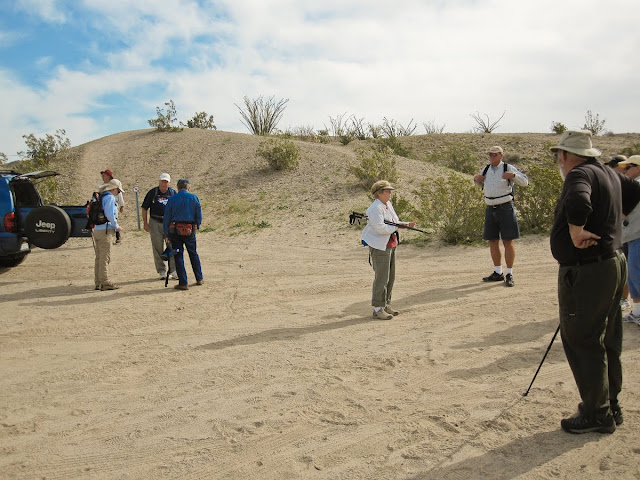 At first I was confused, because you couldn't see the canyon.  But we soon scrambled down into the "slot". 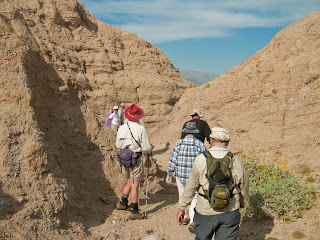 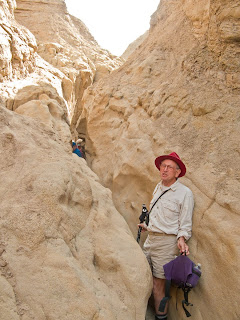 We went through some areas that were really a tight squeeze. 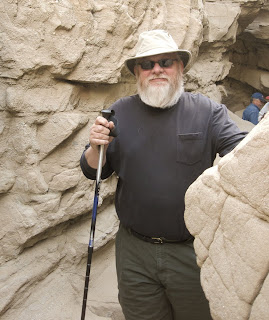 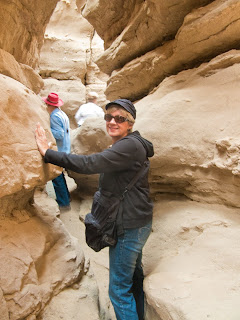 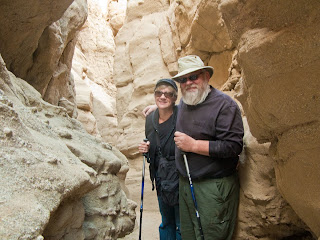 You wouldn't want to get caught down here in a rainstorm. 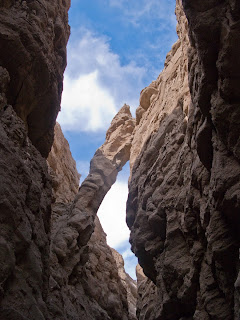 It was amazing to see flowers growing out of the hard dry clay. 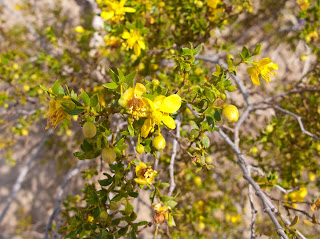 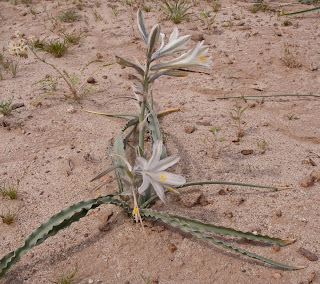 As we walked further down, the canyon widened out. 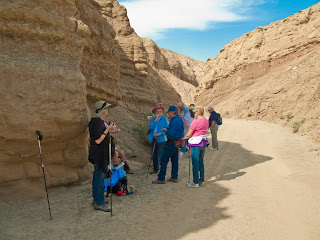 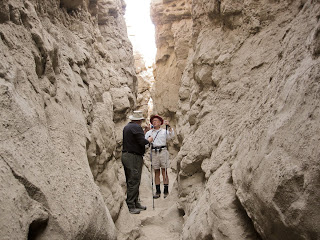 After taking a break the group split in two.  Half of the group went back up the way we came, and the rest of us went on down into the canyon to an area where we had to hike a steep incline back up to the top.  We then walked along the edge of the canyon back to the cars.  About a 4 mile hike round trip.

After everyone had made it back to the trail head, we all drove over to Julian for pie and ice cream.  Not a bad way to end a hike.  Julian has more bakeries than any other small town we have seen.  Judy even bought a frozen apple pie that is sweetened with apple cider instead of sugar.  It's still in the freezer for another day.

We are really enjoying our stay here, but on Saturday it will be time to move on.  We are headed over to the Central Coast where we will be parking our RV for 6 nights at a local winery- for FREE.  More about that next week.

Until later.
Posted by John and Judy at 6:52 PM

you two are having quite the adventure!

nemo just remembered today that april is coming and grandma and grandpa are coming to visit in april. he was pretty disappointed when i said you had a change of plans...maybe in the summer, though?

The pics look beautiful! What amazing country. We are looking forward to getting out and hiking at our local parks. The fresh air does wonders for stress levels, doesn't it! Glad you guys are having a good time. We all miss you both. :)

I know, I know I'm a little late with my comment but I wanted to add my two cents worth. What a beautiful area to hike!! I know you all had a great time.
And since I am late...hope you are enjoying your new view!! :)