Rain, Redwoods, and a leaky drain 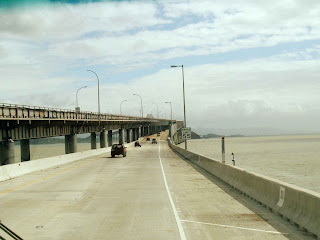 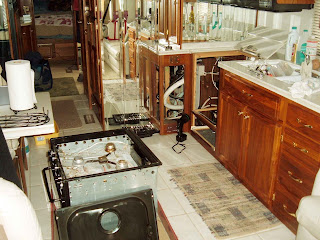 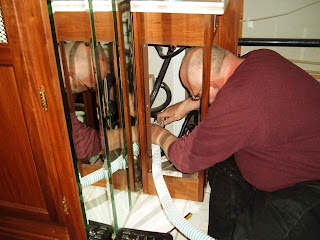 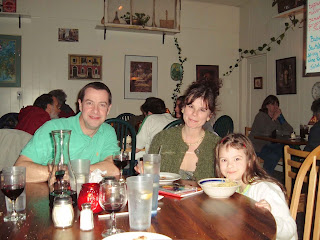 Saturday morning was departure day from Portland and we were on the road by 7:15. It was raining but traffic wasn't too bad.
With snow in the forecast for the mountain passes in southern Oregon and northern California, we had to make a decision on which route back into California we would be taking. After checking the internet for a weather update on Friday we realized we were required to have chains if we wanted to go on I-5 over the Siskiyou mountain range in southern Oregon. Finding out that it would cost us $200.00 for chains, we decided to take the coastal route. It is slower but much more scenic.
We took on some fuel south of Portland and arrived in the town of Winchester Bay by 11:30. Hmm, it's lunch time and we're in Winchester Bay. Isn't that great little seafood place called Griff's on the Bay located here? It was pouring rain when we arrived but we didn't care. It's a beautiful area even when it rains. So once again we got to enjoy some great local seafood. I had a bowl of cioppino, Judy had a cup of clam chowder and we split an order of halibut. Very delicious.


We hit the road again and ended the day south of Eureka, California in a little town called Fortuna. After 9-10 hours on the road we were both tired so dinner consisted of a frozen south beach microwave meal, and a baked sweet potato. Judy was doing dishes and noticed we had a leak again under the sink. We have had a problem with the drain most of the trip but were hoping to make it home before we needed to do serious repairs. Looks like I will be doing a drain hose repair when we get to Paso Robles.

Sunday morning we were again on the road by 7:15 and headed south through the redwoods on 101. About 2 hours later as we were driving along Judy asked what all that white stuff was on the road. We were at a high enough elevation that the rain had turned to sleet. It only lasted 15 minutes or so, but we quickly slowed down. Looking over the edge with no guard rails to see a stream several hundred feet down was enough to keep me on my toes. We came through Oakland around noon without any slowdowns. Traffic was heavy but since this was Sunday, it was moving well and the rain had stopped.

The rest of the trip was uneventful. We drove through the Garlic capital of Gilroy, through Salinas and arrived at Wine Country Rv Park where we will be for a week. I think both of us are a feeling a little down. Both from the trip and from missing those we left in Portland. But once again we are thankful for our time there and for safe travels.
Monday morning it was time to tackle the drain problem. As you can see in the pictures it required taking out the stove to get to the drain. The problem was twofold. First a plastic fitting had broken, and secondly, the flexible tubing which connects 2 rigid parts of the drain had split. The reason for all this is our home has a slide which moves in and out. There needs to be some flexible hose to allow that to happen. Three trips to the plumbing store and a little bit of fabrication and the repair was finished. I guess all those years of working on the boat and photo processors paid off.
The day wasn't all work and no play. In the late afternoon we drove over to Cambria to have dinner with friends visiting from Michigan, Chris, Teresa and Audrey. We will be visiting some wineries in the Paso Robles area and doing a little wine tasting for the next couple of days.
We arrived back home in time to do some reading and tv watching, and Judy did a little knitting on another blanket she's working on.
We hope your day was a good one too.
Posted by John and Judy at 7:14 PM